I’ve been drawing and writing since I can remember.

One of my first written pieces was a travel diary (below). I was 8 years old. I do hope my writing skills have improved since then.

My first ‘book’ was Cat’s Eyes. Written when I was 12 years old. A fast-paced sci-fi thriller, it was never destined to grace the bookshelves, but it DID get me A++ in English.

In later years I turned my hand to children’s books – mistakenly believing that was an easier genre than travel memoirs or thrillers – but at least I got published. 33 times in fact.

I am now more interested in writing for adults, mostly autobiographical, having decided that truth is often stranger than fiction. To that end I have had two books published: ‘Men on  the Menu’ , and ‘Bad Hair Year’.

I have just completed the (27th!!) draft of a fiction novel  – Through the Eyes of a Dog – which I’m hoping will get at least one publishing house howling with excitement. Watch this spot.

My first recorded artwork was produced when I was 2 years old. My father generously suggested the random squiggle in the middle was actually a piglet.

By 4 years old I had progressed to portraiture.

By 5 years old I was experimenting with colour.

By six I was becoming more subtle with my palette. This finger painting won First Prize, and £2.00 in the 6-8 year old section of the local Art Show. My father entitled it Study in Green. 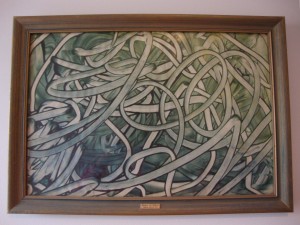 By 6 ¾ my art had developed some rather disturbing sexual themes, which fortunately I grew out of. 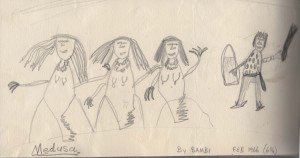 After school I completed a diploma in Design at Swinburne College (Melbourne), then free-lanced for large companies for many years – designing crockery, stationery, cryptic board games, 3-D jigsaws, sports and children’s clothing. I was also Creative Manager at Playgro (plush nursery toys) for 7 years.

These jobs/projects were interspersed with running my own small business enterprises – producing boutique resort wear, resort maps, upmarket Australian wildlife souvenirs, and the aforementioned children’s books. I also created a character concept called Rainbow Kidz which was developed into a hugely successful range of children’s dolls and clothing, and is now (2022) being developed into a TV series with one of the largest TV and toy companies in the world. Watch this spot.

I am now focussing on drawing wildlife, which is finding a variety of homes – from jigsaw puzzles to greeting cards to illustrated games, and even more children’s books. I am also passionate about donating my work to various Animal Charities around the world, to be used in educational programmes

I have always been an adventurer, keen to travel the world and embrace exotic cultures.

My first foray into the unknown, however, was cut short. At 9 years old I was planning to run away (see exceptionally well researched map below). But it was raining that day. So instead I ran away to the spare bedroom. Well, for three hours. When it was clear that no-one had noticed I’d ‘left home’, I decided it was time for afternoon tea, and running away could wait for another day. 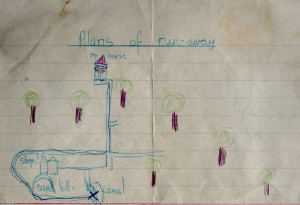 When I’d grown up a bit, I started travelling in earnest, and haven’t stopped since.

Plus another 9 countries I visited in 2006 as part of my book Men on the Menu. Portugal. Ireland. Scotland. Hungary. Monaco. Liechtenstein. Denmark. Oman. United Arab Emirates.

And travel in the future? Perhaps a working holiday in a wildlife orphanage in South America or Madagascar. Iceland and the Arctic are also way up there on my bucket list. Watch this spot.

I’m happy to reveal however that between travels I have a very busy life, mostly made up of spending time with friends and family, throwing the odd dinner party, trying out new restaurants and hip new cafes/bakeries, doing short courses (I especially enjoyed the Champagne Challenge), going to the theatre, watching all genre of film at the cinema, enjoying amazing sunsets from my house on the coast, and generally trying to fit as much as possible into my life.

Oh… and the question everyone always seem to ask – I am currently single, have no children (but 11 fabulous nieces and nephews), and at some stage will look to adopt a three-legged dog from the pound.